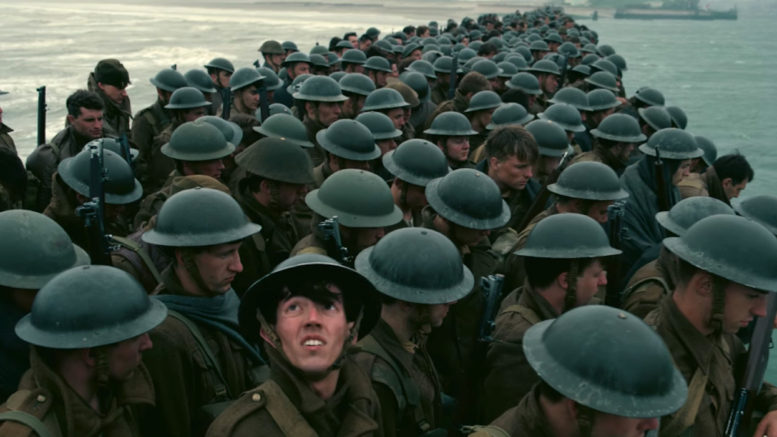 Soldiers from the Allied forces are stranded on the beach and harbour of Dunkirk, the Germans are moving in on land and attacking from the air, leaving the troops with one option as they wait for evacuation…survive.

Dunkirk (12A), starring Mark Rylance, Tom Hardy and Kenneth Branagh, is beautifully shot; with long extended shots of the crowded beaches, claustrophobic shots of panicking soldiers inside ships as they fill with water and incredible aerial battles. Cristopher Nolan did a tremendous job of conveying the desperation of these soldiers, the look of terror as they’re clambering over each other trying to get to cover was very effective.

Hans Zimmer’s score was incredible, the ticking you see in the trailers was constant throughout the film. It was very subtle in times but it was always there, showing a sense of relentlessness as it could build up at any time adding to the intensity of a particular scene. I was on edge for the majority of the film thanks to his score. The sound of gunshots were so loud and realistic, and sound of the spitfires swooping down on a bombing run was terrifying, the look of horror as every soldier’s eyes fixate on the sky when this sound is heard showed a sense of helplessness, as all they could do was hit the deck and hope the enemy misses.

There were multiple stories that all intertwined with each other. Fionn Whitehead, and a number of other soldiers, including Harry Styles who surprised me in what was a perfectly capable performance, are soldiers desperately trying to get home. Tom Hardy is an air force pilot trying to stop bombing runs on the beach and rescue ships. Mike Rylance charters a civilian boat to save struggling soldiers in the water. The lack of dialogue throughout the movie meant that there wasn’t really an actor that stood out to me, with them all delivering competent performances.

One negative I do have is that there were no ‘characters’, just people. With the exception of George, the only name I remembered, there wasn’t a character I could grab onto and invest, emotionally, in their performance. Now I know that Nolan didn’t want scenes of soldiers sitting round a fire explaining back stories and telling us about their loved ones at home, but I feel like I needed to know more about these characters in order to fully connect with their stories.

Overall, this film was remarkable, I might even say it was a masterpiece in film making. Incredibly shot, couple that with an outstanding score as well as brilliant set pieces, you have a movie worthy of multiple Oscars, which I’m sure it will secure.

What a year for cinema! Join Josh Burford as he counts down his top 10 best movies of 2017