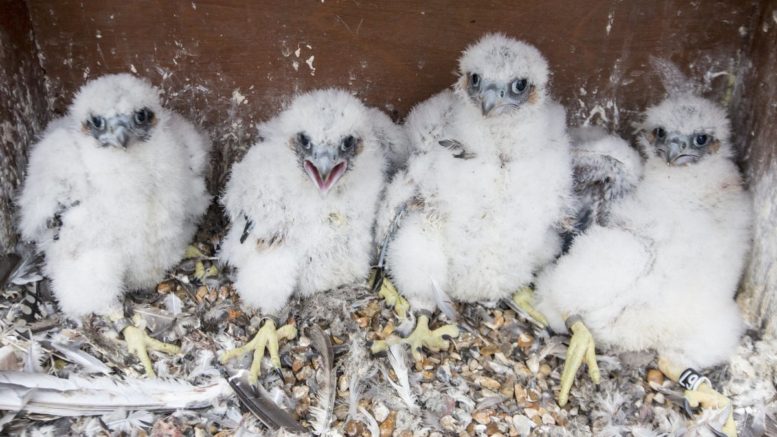 The cathedral social media team took to Twitter (rather appropriately!) to tell the world: “After a long and anxious wait the Cathedral’s peregrines have successfully hatched four young for the second year running.”

Now the peregrines, which have been featured on television programmes such as BBC Springwatch and The One Show, are set to be ringed before flying the nest.

The cathedral website explains: “In June the project moves to the Cathedral Green where visitors can use binoculars and telescopes to watch the young start to learn to fly.”

Footage from a video feed, which has been dubbed, “peregrine cam”, gave viewers the chance to see the four peregrines eggs.

Prior to the hatching, the cathedral also had an area set aside to view the birds, while the RSPB have been on hand to help answer visitors’ questions about the birds.

The peregrine is a large falcon and it is accepted that it is the fastest flying bird in the world. It is known for its spectacular aerial dives in pursuit of prey. Dives have been known to reach up to 112 mile an hour.

It is said that many of the peregrine chicks raised over the years have later been spotted at locations far and wide. The peregrines do not hunt around the immediate cathedral precincts, however, as there are too many other buildings and not enough space.

In Britain, most peregrines nest on cliffs, including the Sussex coast between Brighton and Eastbourne…and cathedral turrets, of course.

See the birds at (and picture courtesy of) www.chichesterperegrines.co.uk

First past the post! Tinie Tempah a racing cert to be winner as he kicks off Goodwood’s Three Friday Nights

Game on! Novium Museum celebrates launch of a major touring exhibition from V&A with fun day