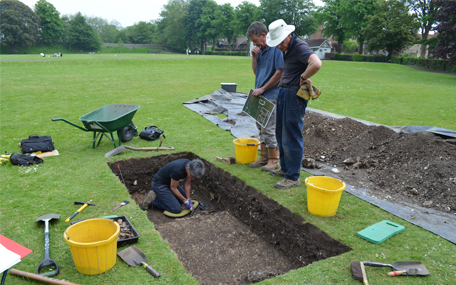 A stunning Roman discovery said to be of “national historical importances” is set to be unearthed in Chichester’s Priory Park at the end of the month. After surviving over 1,600 years in its city centre, the remains of three Roman buildings will be uncovered for the first time.

The dig, which the public are invited to view, takes place between May 27 and 29. James Kenny, archaeologist at Chichester District Council, will then hold a series of talks in the park to reveal the findings.

Archaeologists were amazed to find the footings of three almost complete Roman buildings earlier this year, and scans appear to show two large masonry houses, which would now be the equivalent to Chichester’s grand Pallant House Gallery building.

Mr Kenny was thrilled by the discovery and is keen to uncover the secrets that are buried in the park.

He said: “What’s remarkable about this discovery is that it has survived over 1,000 years in a currently occupied city. This is because they are under a park that has never been built on. It’s almost unique to see Roman houses survive in this type of setting and to be so complete.

“The location marks what may have been one of the more affluent parts of the Roman Town, with these houses being the equivalent to a property worth millions of pounds in today’s society. The two houses have walls surrounding complete rooms, which may be set around a courtyard or atrium. There is also a deep masonry building with a rounded end.

“We are intrigued to find out what this building is. It could be a cellar, part of a bath house, or something even more exciting. We can’t wait to find out. These are definitely going to be some of the best surviving Roman remains that have been uncovered in a city environment.”

It is believed that the houses were originally on a street, but that this hasn’t survived because of the Second World War reservoir that was built in the park. The scans reveal that another Roman street ran further east under Priory Park, but this will not be uncovered.

He added: “We are just going to focus our attention on the area south of The Guildhall building that is located in the park. We’re very lucky, because this is an area that is not regularly used and so we can carry out a dig to uncover the buildings that we have found. This is sure to unlock even more buried secrets and items of importance.

The council says it hopes that the archaeological dig will reveal many of the secrets that have been hidden away for 1,600 years. They will be doing this with the help of the Chichester and District Archaeology Society.

“We want to be certain what the archaeology is and demonstrate its significance. We also want to encourage residents and visitors to come and look at it and find out more about the discoveries that we uncover. We hope to use this evidence to bid for money to fund a series of excavations over successive years.

“This discovery is a unique part of Chichester’s – and this country’s – history, and so it is important that we make this accessible so that people feel involved. We look forward to sharing our findings with residents and visitors on Wednesday 31 May through a series of talks at 10am, 12 noon, 2pm and 4pm.

“We do not plan to keep the remains on permanent display – when the work has been completed we will return the ground to its current state. Instead, the likelihood is that we will create 3D imaging and information that will provide people with all of the information that they need in the long term,” he said.

The discovery was made using ground penetrating radar equipment and was confirmed following a very small dig carried out by Chichester District Council’s archaeologist and members of the local archaeological society.

Chichester District Council’s Cllr Susan Taylor, cabinet member for planning, says the discovery is “very exciting and is of national historical importance”. She added: “We know that this has created a lot of interest and local residents are intrigued by what has been discovered on their doorstep and so we are excited to give people the opportunity to visit the site and see the discoveries.

“Chichester’s rich Roman history already attracts people from far and wide, due to its city walls and Roman Bath House, which is located in our Novium Museum. We hope that these further discoveries will encourage even more people to visit our beautiful city.”

A series of talks on Wednesday 31 May in the park to reveal the findings. The event has been organised in order to tie in with the city’s Roman Week which will offer a variety of activities and events to celebrate the city’s Roman heritage.