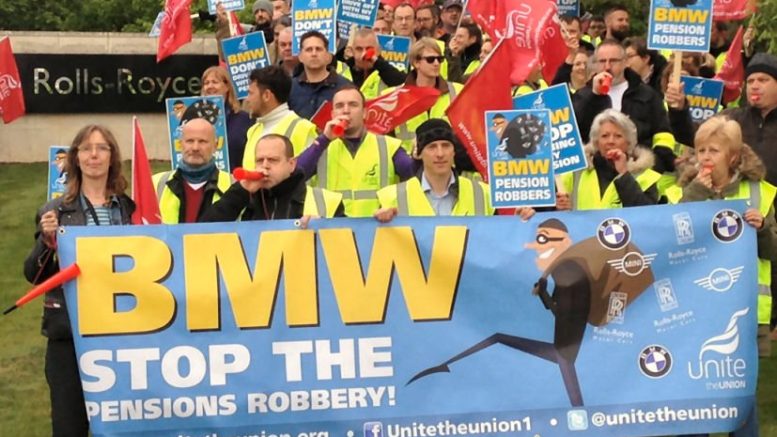 Rolls-Royce car factory workers in Goodwood are on strike for the first time today as part of industrial action in a row over pensions at owners BMW.

Members of the Unite union have walked out for 24 hours at the HQ of the luxury carmaker after previous stoppages at other BMW factories in the long-running dispute.

The walkout came after negotiations trying to work out a plan to break the deadlock over the pension changes concluded without any such agreement yesterday.

Plans to close the final salary pension scheme could lead to some workers losing more than £160,000 in retirement income, say union representatives. Workers who make the elite cars at the factory, such as the Phantom and Ghost, started their action at 6am.

“BMW bosses need to realise that workers who make the world-renowned Rolls-Royce motor cars, along with their colleagues elsewhere in BMW UK, will not roll over,” said Unite national officer Fred Hanna.

“Rolls-Royce workers make some of the most luxurious cars for some of the richest people on the planet. Yet BMW wants to repay their hard work and craftsmanship, which has generated record orders and delivered record profits, by pinching their pensions.”

Union bosses say BMW bosses need to reflect on today’s talks and demonstrate a serious willingness to address members’ concerns with industrial action having an impact on production.

“There is a window of a week, before further action, in which BMW can work with us to hammer out a deal that is good for the workforce and the business. A failure to do so will result in the further planned industrial action going ahead with the continued disruption it brings to car production,” he added.